One of the things I wanted to do to switch from Domoticz to Home Assistant was to put new temperature sensors in all areas of our house. In Domoticz I used various Oregon Scientific sensors, which I then read with RFXCom. 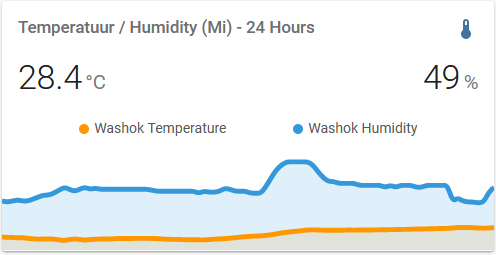 Because I didn’t want to invest in more RFXcom sensors and I didn’t have sensors for all rooms, I decided to use another option. Nabu Casa, the company behind Home Assistant, acquired ESPHome earlier this year.

ESPHome is an open source framework for controlling low-cost sensors, based on the ESP8266 or the ESP32. One of the things ESPHome supports are Xiaomi Mijia BLE Sensors.

Using the video and explanation on Intermittent Technology I have set up two ESP32 devices as receivers of the different temperature and humidity sensors that I have now placed in all rooms of the house.

With a tool developed by Aaron Christophel I could hack the sensors, so that they release their data via bluetooth and is it possible to set, for example, how often the sensor issues data. The longer the time between two updates, the longer the battery lasts, so for now I’ve set them to send an update every 5 minutes.

That update is passed on to Home Assistant via the ESP32s, where you can then see the temperature, humidity and battery percentage per sensor. You can of course also use those values in your Automations. For example, I now use the difference between the temperature outside and in the room to see if it makes sense to open the windows for cooling.